Posted by Fabian Marcaccio at 9:19 AM 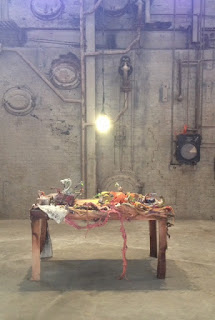 BravinLee programs will present Table, by Fabian Marcaccio. Marcaccio’s structural canvas work integrates photography, painting and sculpture. The Table-top contains items likely to be present on a table in a secret interrogation chamber. The essential cruelty of the evil premise is explored obliquely through the cluttered banality of an inquisitor’s work surface. The table is illuminated by a single light bulb hanging down from the Boiler’s 30 foot ceiling. The creepy beauty and black-box brutality of The Boiler’s interior amplifies the subject matter of Table existing in a clandestine and horrific chamber. Fabian Marcaccio recently had one person shows at CAAM in the Canary Islands, The Museum Lehmbruck, in Duisburg, Germany, The Kunstmuseen and the Museum Haus Esters, both in Krefeld, Germany. In conjunction with the Krefeld exhibitions, a book on Marcaccio’s rope paintings titled Some USA Stories was published, edited by Martin Hentschel

Posted by Fabian Marcaccio at 9:16 AM 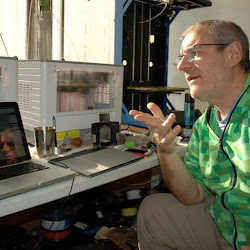